The SoDale Gala Opening is an event hosted by the Lodge family in order to showcase their latest project, SoDale.

With the SoDale open house approaching, hoping to woo potential investors at an open house for a new development project, Hiram Lodge invited the biggest prospects — the St. Clairs, from New York. Veronica was tasked with the job of persuading them to invest, and judging by how influential they were, others would also comply. Her main focus was drawing in Nick St. Clair, seeing as he had his father's ear, by showing him all the good things Riverdale had to offer.

Veronica welcomed the St. Clairs to Riverdale as they entered the lavish Five Seasons hotel. She told them that while they were in town to think of her as their "corporate concierge". If they needed anything, they should feel free to ask. For starters, Nick asked for a better hotel, as he and his family were used to establishments of higher quality. Admittedly, she said that it wasn't the Waldorf, nor the Plaza, but, the Five Seasons, however, like all of Riverdale, had its charms. Though, Nick could only see one charm, that being Veronica, who was as lovely as ever by his account.

Hiram and Hermione arrived at the opening, arm-in-arm, greeting guests as they proceeded down the aisle. If the successful turn out of the open house didn't convince the St. Clair's to invest, nothing would. Hiram called over Veronica to ask how things are going with her showing Nick the best that Riverdale had to offer. From all reports, Veronica's charm offensive was paying off. Veronica then turned around to the sight of Nick and his family arriving at the Gala. Hoping to avoid another confrontation, she made up an excuse to go silently yell at the caterer after discovering that the canapes were running low. Meanwhile, Hermione wrangled up Fred. She told him that the entire point of the open house was to socialize, though Fred figured he'd leave it to Hermione and Hiram, the professionals. However, he wasn't without charms of his own, Hermione noted. She and Hiram were glad that he was back at work.

While Hermione and Veronica were off tending to business of their own, Hiram ran into an old friend; Hal Cooper. Where's Alice, Hiram asked. Just between the two of them, Hal explained that the published mugshot of Alice's arrest, from many years ago, when she was a teenage Serpent, was taking a toll on her. So, they both decided it would be better if Hal covered the event on his own.

Hermione told Fred that she and Hiram would appreciate it if he joined them on stage. She commented that he might as well, considering he built it. However, their discussion was cut short by Alice's unexpected arrival in a red snake print dress and a matching gold snake necklace.

Taking into account his recent actions from the night before at the party where he insulted Veronica and tried to kiss her, Nick arrived at the event with an apology for Veronica, saying that he has been in and out of rehab over the past few months, and while this wasn't an excuse, he would like a second chance. While the night before was messy, Veronica understood his struggle, and was willing to put the past behind them by starting over with a glass of ginger-ale. Nick then spotted Cheryl entering the event from across the room, as she waved at him.

Nick approached Cheryl at the Gala, disappointed that they didn't get much of a chance to talk at the party. Cheryl was choosing to blame Betty's Britneyesque meltdown for that, and so she was willing to let Nick make it up to her. He grabbed Cheryl a glass of champagne, slipping a date rape drug into her drink, before handing it to her.

Hiram, Hermione, and Fred took to the stage to make an announcement as the hosts of the event. A new story began in Riverdale that night. A story about reinvention and aspiration. The building would be the first chapter of that story. Luxury apartments, shopping, and even a golf course. The Southside as they knew it would be gone, replaced with a new Eden. So, they raised their glasses to a brighter tomorrow. But for that day, they celebrate with a little music from Josie and the Pussycats.

A little while later, Cheryl danced with Nick as the Pussycats performed on stage. Unfortunately, the effects of the date rape drugs slipped into her drink by Nick were fast acting. Cheryl began to lose her balance, but she told Nick that she was fine, and that she only needs some air, as she was completely oblivious to the fact that she'd been drugged. Hardly capable of standing on her own two feet, Nick escorted her into the house, unaware that Veronica and Josie were watching him from the stage. Cheryl stumbled into the hallway, with Nick helping her into his room and onto the bed. A barely conscious Cheryl lays on the bed, helpless to fend off her attacker. Fortunately, the Pussycats intervene. As Josie checked on Cheryl to ensure that she was unharmed, Veronica, Valerie and Melody viciously attacked Nick.[1] 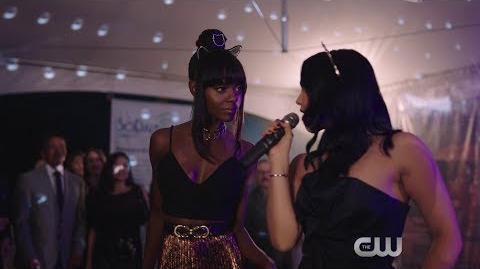 Retrieved from "https://riverdale.fandom.com/wiki/SoDale_Gala_Opening?oldid=143964"
Community content is available under CC-BY-SA unless otherwise noted.