Josie and the Pussycats

"Chapter Eighteen: When a Stranger Calls"

Out Tonight is a song written by Jonathon Larson for the Broadway musical Rent. The version covered in the show is from the movie adaptation of the same name.

It was covered by Josie and the Pussycats who performed at the SoDale Gala Opening. During the scene, Cheryl begins to feel the effect of the date rape drug Nick put into her drink, and he brings her back to his room. Having seen Nick, the Pussycats run to Cheryl's aid, and while Josie comforts her, Melody, Valerie, and Veronica proceed to attack and beat up Nick for what he was about to do. Also during the number, Jughead is seen passing his final trial and earning his Serpents jacket. [1]

Josie:
What's the time?
Well it's gotta be close to midnight
My body's talking to me
It says, "Time for danger"

Veronica:
It says, "I wanna commit a crime
Wanna be the 'cause of a fight
I wanna put on a tight skirt
And flirt with a stranger"

Josie:
I've had a knack from way back
At breaking the rules once I learn the games

Veronica:
Get up, life's too quick, I know someplace sick
Where this chick'll dance in the flames

Josie:
We don't need any money
I always get in for free

Veronica:
You can get in too
If you get in with me

Josie and Veronica with Melody and Valerie:
You wanna play?
Let's run away
We won't be back before it's New Year's Day
Take me out tonight

When I get a wink from the doorman
Do you know how lucky you'll be?
That you're on line with the feline
Of Avenue B

Josie and Veronica with Melody and Valerie:
You wanna prowl?
Be my night owl?
Well take my hand we're gonna (Josie: howl)
Out tonight

Valerie:
In the evening I've got to roam
Can't sleep in the city of neon and chrome

Melody:
Feels too damn much like home
When the Spanish babies cry

Josie:
So let's find a bar
So dark we forget who we are
Where all the scars
From the nevers and maybes die

You're sweet
Wanna hit the street?
Wanna wail at the moon like a cat in heat?
Just take me
(Out tonight) 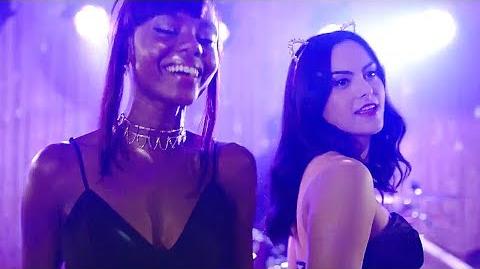 Retrieved from "https://riverdale.fandom.com/wiki/Out_Tonight?oldid=153674"
Community content is available under CC-BY-SA unless otherwise noted.