Fred Andrews
Luke Perry was an American actor. He portrayed Fred Andrews on The CW's Riverdale until his passing on March 4, 2019 after suffering a stroke. Later that day, Riverdale's executive producers, Warner Bros., and The CW released an official statement regarding Perry's untimely passing.[1]On April 13, 2019, a tribute to Perry was held at Warner Bros studios.[2]

According to Sophie Perry, the daughter of the late Luke Perry, her father was laid to rest in Tennessee, in a biodegradable mushroom suit, which is an eco friendly burial option.[3] 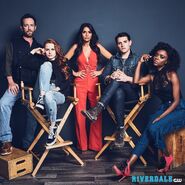