In an alternate universe, Sabrina Morningstar meets a cast of familiar faces — and investigates the thin line between fact and fiction.

Sabrina Morningstar exits the mirror into the second cosmos, where she is approached by Aunt Hilda and Zelda. However, nothing is as it seems. Her aunts look different, and they appear to be on a TV set, where Blackwood works as the director. Zelda and Hilda promise to have Sabrina prepped for tomorrow’s scenes.

Hilda and Zelda explain that they live and work on the stages, where there’s an endless supply of tuna. Sabrina is confused as Ambrose said the two cosmos would be identical, however, Ambrose doesn’t even exist in this world according to the aunts. They warn Sabrina to always prepare to show up for work. They’re the stars of a hit TV show. Every time they mess up, they get a strike, and three strikes gets you sent to the Green Room. People who are sent there are never heard from again. The last Sabrina was sent to the Green Room. Sabrina Morningstar wonders if she's in one of the Eldritch Terrors, but the aunts have no idea what she’s referring to, as there aren’t any real witches in this world.

After saying good night to her aunts, Sabrina goes looking around the set, though there doesn’t appear to be any way of escaping. She enters the mortuary and finds her aunts sleeping. While Ambrose may not exist, Sabrina goes into the attic in hopes of finding his books and research, but they’re all props. Sabrina then heads to bed, but she notices that the mirror she arrived in this cosmos through is gone.

Sabrina is awakened from her sleep the following morning by Melvin. He tells her that script pages are on her nightstand. He agrees to search for her mirror and tells her that she needs to get moving before she gets a strike.

Sabrina’s first scene of the day consists of her in a cockroach costume. Ms. Wardwell asks if she knows her lines. Sabrina assures her that she has them memorized. She looks over to see Elspeth in a white wig and her actual aunts. Ms. Wardwell explains that they’re the stand-ins.

Sabrina films her first scene with Aunt Hilda and Zelda. Salem speaks, shocking Sabrina, causing her to break character and get her first strike from Blackwood. Ms. Wardwell explains that Salem’s the star and reminds her that three strikes means the Green Room. On Blackwood’s cue, they restart the scene.

Sabrina returns to her room and recounts all the Eldritch Terrors that have presented themselves thus far, that being the Darkness, the Uninvited, the Weird, the Perverse, and the Cosmic. Before she can finish, Salem welcomes her to the family and asks if she needs anything. Sabrina tells Salem about her missing mirror, which he agrees to track down. Sabrina asks Salem about the Eldritch Terrors, but he doesn’t know what she’s referring to.

Sabrina, Harvey, Roz, and Theo have a scene in the library, where Theo mentions how Billy and Carl keep bullying him. Harvey then kisses Sabrina, who breaks scene again and receives another strike from Blackwood, who inquires about her dilemma. Sabrina says that Harvey slipped her some tongue during their kiss, which is unprofessional. Harvey reveals that he and Sabrina are dating in this world and that Caliban doesn’t exist. The only Nick they know of is Harvey’s stand-in. Blackwood would like to restart the scene and tells Sabrina to make it sexier. After the scene, Harvey invites Sabrina over to his place.

Sabrina reads over her lines in her room. She is joined by Hilda, who asks how she’s fitting in. Sabrina reveals that Harvey asked her out, but she isn’t sure she wants to pursue him, especially since she’s married to Caliban, the Prince of Hell. Hilda mistakes Sabrina’s actual life for a role on a former show and tells her to remain focused on their show, as it’s the only thing that exists for her now. She also advises Sabrina to go over to Harvey’s.

Sabrina and Harvey have dinner, which consists solely of tuna. She asks Harvey what he likes to do for fun before noticing the drawings of the Eldritch Terrors on Harvey’s wall. He claims that they’re from the art department. He then suggests that they go over lines. Ms. Wardwell has all the pages in her binder, so he often sneaks an early peak as it takes him longer to remember his lines.

Sabrina and Harvey go over their lines, which Sabrina recalls from having an actual conversation with Harvey prior to revealing to him that she was a witch, the night before her 16th birthday. Sabrina asks if he has any copies of the episodes, which he does. He turns on the pilot and picks the scene where Sabrina reveals to Harvey that she’s a witch and instantly makes him forget when he panicks. Sabrina is freaked out and leaves as these episodes that Harvey have in his possession are from actual moments in her life.

She then goes through a door that says not to open if the red light is on. She finds herself in the Green Room, where she comes across Ambrose, who is well aware of the threat they’re facing. He reveals that he’s making cat food for the consumption of an Eldritch Terror, specifically the Endless, which is either inside the Cosmic or vice versa. Ambrose then reveals that Salem is the Endless. When Ambrose deduced what Salem really was, he was banished to the Green Room. Cats have nine lives, which is the same as saying they’re immortal, in other words, Endless. Moreover, cats get bored easily and toy with their food. The sound stages are his universe and they are his means of entertainment. Unfortunately, Ambrose says that there is nothing they can do.

Sabrina returns to her room to find a new mirror in her room; a gift from Salem. Sabrina awakens the next day and performs a scene in the girls restroom at Baxter High with Roz, who reveals that she’s going blind. Prudence and Agatha interrupt, dressed as Baxter High Ravenettes and mock Roz. After the scene, Sabrina asks Blackwood about Salem, who only shoots one day a week. Sabrina then approaches Roz, who reveals that much like in the script, she’s actually going blind. Whatever happens in the show happens in real life. She remarks that it’s better than being sent to the Green Room.

The food table is overloaded with tuna fish. Sabrina advises the Hilda and Zelda stand-ins, who resemble her actual aunts, from eating the tuna because it is made out of former cast and crew members. She questions how long they have been stand-ins. Hilda reveals that they used to play the actual aunts until they were replaced. But being stand-ins is better than the Green Room. However, as stand-ins, they’re forced to sleep under the beds of those who they stand-in for.

Sabrina goes into her room and looks under her bed, where she finds Elspeth, her stand-in, lying on the cold floor.

Sabrina finds Caliban working on the construction crew for the set. She hugs him, but he explains that they’re not allowed to touch or even talk to the cast. He was an actor but prefers to be part of the crew, where he’s not just a shirtless, pretty face. She reveals to him that in another universe, they’re married. He asks if she’s happy. She replies that she’s more content knowing that he’s around. He then reveals that he’s working on an appliance for the next episode, specifically a void.

Sabrina gathers the entire cast after reading the script to inform them that the Void is coming to destroy everything. So, they need to find her magic mirror and escape. Both Aunt Zeldas question the legitimacy of her claims. She reveals that it’s in the script and that the Void is coming to end everything. The Aunt Hilda and Zelda stand-ins believe Sabrina, but Hilda and Zelda created by the Cosmos insist that none of them are in any danger and that the Void changes nothing. Everything simply resets. Hilda warns them all to go back to their respective sets unless they want to get sent to the Green Room. The Hilda and Zelda stand-ins tell Sabrina to take them with her when she leaves for her world.

The following morning, Sabrina looks at her calendar and notices that the month of October ends on that day, October 15th, rather than the 31st, due to the Void’s arrival and the end of everything.

Sabrina is joined at the breakfast table by Nick, who was initially appointed as stand-in but is now portraying Harvey. The real Harvey was sent to the Green Room. Sabrina confronts Blackwood and Ms. Wardwell about the script, particularly the Void. Blackwood explains that he’s merely the director. The only person authorized to rewrite the script is the head writer, who the Hilda stand-in reveals can be found in the high school.

Sabrina goes to Baxter High and discovers that Salem is the head writer. Sabrina has a few questions about the script and the Void. She reveals that she arrived from a different Cosmos to stop the Cosmic, but she landed right in the Endless. And now the Void is coming to end everything, including the Endless. However, Salem, the Endless, claims that he and the Void have co-existed since forever. Unlike the other terrors, they’re opposites and equals. Salem is mistaken and believes that he’s never ending, but Sabrina reveals that the Void will be the end of the Endless and proves it by showing Salem the main script, which ends after page 29 when the Void arrives.

Sabrina and Salem arrive on stage D. Sabrina says that with the Void coming that she’s going to the store to buy some candles, to which Zelda and Hilda reply that that’s not her line. They look to Salem to correct Sabrina, but he agrees that she should go get the candles. Sabrina and Salem then realize that the entire cast and crew are servants of the Void, including Blackwood, Ms. Wardwell, and Melvin. Sabrina then proceeds to escape through a fake wall with Salem in hand. He informs that her mirror is in prop storage on the other side of the sound stage. Sabrina takes off running and Hilda and Zelda chase after her. Salem proceeds to make Hilda twist her ankle and Zelda have a sneezing fit, allowing for him and Salem to escape.

Sabrina makes it to the library, where Theo and Roz have been killed by Prudence and Agatha because the Void demands sacrifice. Salem then tells Agatha and Prudence to turn on each other. Sabrina runs into the Green Room, where she finds Harvey, Caliban, and Ambrose dead. Nick reveals himself as a servant of the Void and charges towards Sabrina, but Salem has it that he slips on a banana peel. She then goes to the Academy in search of the stand-in Hilda and Zelda, who resemble her actual aunts, but find them being eaten by the other Hilda and Zelda, who serve the Void. Sabrina flees and jumps through her mirror with Salem in hand, narrowly escaping the Void. 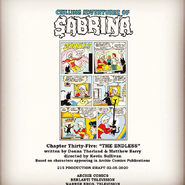