A mysterious demon wreaks havoc on Spellman Mortuary. Sabrina goes rogue and puts her powers to the test.

Hilda is in her room reading a novel while Zelda is reading the Satanic Bible. Hilda mentions the idea of her applying for a job at Cerberus Books, which Zelda immediately condemns. Suddenly, Sabrina runs into Zelda and Hilda's room to inform them that she's released a demon into the house after having solved her father's Acheron Configuration. They rush downstairs where Ambrose meets them after having heard all the noise. Zelda tells her niece not to worry as they have protocols in place. The four of them grasp hands and perform a sealing spell to trap the demon within the house. The demon appears on the staircase and Ambrose asks what it wants. The demon, Batibat, tells them that it wants revenge on the Spellmans after having been imprisoned by Edward and then freedom to give other people nightmares. Zelda quickly grabs an empty urn and uses it to trap the demon within with a spell: Turpis et infernis in terris pariunt. Adiuro vos tamen hoc graecas munus. Afterward, the Spellmans sit to have tea. Sabrina questions why he trapped a demon inside the Configuration. Hilda reveals that Edward suffered from insomnia and that he must've trapped Batibat inside long ago because it had been tormenting him.

Hilda tucks Sabrina into bed. Sabrina asks what would've happened had they not trapped the demon. Hilda presumes she would've put them to sleep, separated the four of them so that their dreams didn't cross over, and then plagued them with horrific nightmares so that she could torture them until one of them gave in and revealed the seal to set her free from the house. However, this is exactly what has happened. They do not realize that the sleep demon has already lulled them all to sleep after they finished the spell to seal the house. Batibat tells them all to have sweet dreams. Madam Satan spies the demon through the mirror in Sabrina's room and identifies herself as the Mother of Demons. Lilith tells the Batibat not to harm a hair on Sabrina's head, but Batibat blames Madam Satan for never setting her free. So Batibat smashes the mirror and goes on a hunt for Salem.

Meanwhile, inside Sabrina's dream, her witch life and mortal life have fused together. The Weird Sisters are cheerleaders who mock her. They advise Sabrina against running for Prom Queen as the crown belongs to them. Nick is a football player who flirts with her. He tells Sabrina to ignore them and asks her to prom. Harvey interrupts and proposes to Sabrina.

Sabrina returns home and Zelda instructs her to turn down Harvey's proposal. She's a witch, he's a mortal. Worlds that are, and will always be, diametrically opposed. She instead tells Sabrina to date Nick. Hilda, on the other hand, asks Sabrina how much she loves Harvey and if she truly wants to be with him. If so, then she has to be honest with him and tell him that she's a witch. However, Zelda warns Sabrina that her attempts to conciliate her duality will only bring pain and suffering.

Nick finds Sabrina and proposes that they run away together. He argues that a witch and a warlock is how it should be. However, Sabrina couldn't do that to Harvey. He loves her despite knowing she's a witch. Sabrina is then walked down the aisle by her father, and Father Blackwood officiates the ceremony. Mr. Kinkle and Tommy interrupt the ceremony, calling for the witch to be killed. So Harvey starts to choke Sabrina. He asks her why she had to tell him that she was a witch. He shoves her into an Iron Maiden torture device and seals her inside. Batibat appears and offers to let her but only if she'll tell her the spell to release the seal. Sabrina says that she won't and is left to scream in pain from the sharp spikes inside of the device.

Ambrose dreams of having to perform his own autopsy. Hilda tells him how the victim was a shut-in with no friends and no one to mourn him. During the autopsy, Ambrose asks the corpse what he did during life and if he loved or was loved in return. As he eats his own heart, Hilda interrupts and calls him upstairs as Father Blackwood has come to see him. As he makes his way upstairs, Ambrose runs into Madam Satan, who tells him that she's in the wrong nightmare. Ambrose then meets with Father Blackwood, who tells him that the hex that keeps him in the house has been broken and that he's finally free. He's given a bag of money and told that a car outside waits for him. As he leaves, Batibat appears rips him apart. Ambrose awakens in the morgue. This time around, he is the corpse placed on the table for the autopsy. He's cognizant but unable to move. Batibat asks him for the spell to unlock the house but Ambrose says no. Batibat says that she will return later as she believes that either Ambrose or Hilda will break first.

Hilda is called in to see Principal Hawthorne. He's lured her to his office under the guise of talking to her about Sabrina. In reality, he's trying to make a pass at her. As he does, Madam Satan interrupts and asks if they've seen Sabrina. Hawthorne shoos her away and asks Hilda out on a date. Hilda agrees and returns home to get ready but Zelda keeps shooting down everything she tries on and makes fun of Hilda for being a virgin, telling her that no one will ever love her. Hilda finally snaps and slaps Zelda. She even goes as far as sewing a piece of flesh over her mouth. Later that evening, Hilda confides in Hawthorne about how Zelda treats her and gets drunk on their date. He takes her upstairs under the guise of helping her to bed. However, Hilda then finds herself sitting on the couch, looking drugged and dazed. Hawthorne reveals how he had a brother who was stillborn, who he absorbed in their mother's womb. He shows Hilda his twin brother's deformed figure, which is on his stomach. Hilda tries to leave but finds herself sewn together with Zelda. Batibat offers to separate them if Hilda gives over the spell to unlock the house.

Zelda is reading to the children about the false god and Adam and Eve. The Weird Sisters arrive. They tell her that the Dark Lord will be coming to dinner at her house tonight. Once a year, he assumes the shape of man and visits his most devout disciples. This year it's Hilda and Zelda. Zelda informs Hilda of the Dark Lord's attendance and decides to roast a child in his honor. The Dark Lord arrives but decides to only eat Hilda's vegetable pie since Zelda roasted a Child of the Night rather than a Christian child. The Dark Lord eats Hilda's food and dances with her, which only further enrages Zelda, who is completely ignored by the Dark Lord. Once the Dark Lord leaves, Zelda hits kills Hilda with a shovel. She takes her body to the Cain Pit to bury her. Afterward, Zelda is confronted by the Dark Lord, who asks where Hilda is. Zelda explains to him that this is just a game the two of them play and that Hilda will come back. The Dark Lord explains that this time Hilda is gone forever. Zelda starts wailing and crying at the Dark Lords revelation. Batibat tells Zelda that if she gives up the spell to unlock the house then she'll bring Hilda back.

Sabrina continues to scream from inside the coffin. Madam Satan, disguised as Ms. Wardwell, finally finds Sabrina. Sabrina asks how she is there in her dream. Madam Satan intends to wake Sabrina up, and when she does, Sabrina must get clear of the house. However, Sabrina refuses to leave her family behind. Madam Satan then awakens Sabrina; she picks up the voodoo doll she made of Sabrina and stabs it in the hand. Sabrina wakes up screaming. Batibat hears her scream and comes to investigate, but Sabrina is hiding under the bed by the time she arrives. Batibat leaves and Sabrina escapes up to Ambrose's room. She tries to wake him up but can't. So she grabs one of his books and learns a spell to banish Batibat herself. Salem tries to dissuade her from doing it but Sabrina is stubborn and says that she just has to surprise her. Sabrina confronts Batibat and attempts to banish her, but Sabrina is inexperienced and doesn't have the power. Batibat attacks her and slashes Sabrina's arm.

Sabrina and Salem run upstairs and try to wake up her aunties but they remain asleep. So she decides to lucid dream so that she can wake up her aunties and cousin from the inside. With Salem's help, Sabrina manages to distract Batibat long enough for her to take some foxglove and go back to sleep. She goes into Zelda's dream first but is unable to wake her as Zelda mourns Hilda's death. Next, she visits Hilda in her dream, who helps give her an idea of how to trap Batibat. Finally, Sabrina goes to Ambrose and asks him to help distract Batibat.

Batibat chases who she believes to be Sabrina throughout the house but is actually Salem with a glamour. Ambrose then calls for Batibat and distracts her while Sabrina enacts her plan. When Batibat realizes that she's being distracted, she goes looking for Sabrina and finds her by the balcony. Sabrina uses Hilda's familiars and a spell her to trap Batibat in a dreamcatcher made of spiderwebs. Having captured Batibat, Ambrose, Zelda, and Hilda awaken and go to check on Sabrina. The Spellmans are all awake and they seal the demon in a mason jar.

Ambrose, Zelda, and Hilda are all on edge because Sabrina walked through their dreams, seeing all of their darkest nightmares. Zelda apologizes to Sabrina for behaving so cowardly when she found her in the dream. Sabrina tells her that she hardly remembers any of it. Because of her dream, Sabrina calls Harvey and asks him if he'd ever hurt her. He assures her that he wouldn't. She tells him she'll see him at school tomorrow. Sabrina then recalls Ms. Wardwell rescuing her from her dream and confronts her at her home. Madam Satan invites her in and tells her that she better sit down. 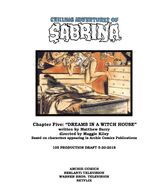